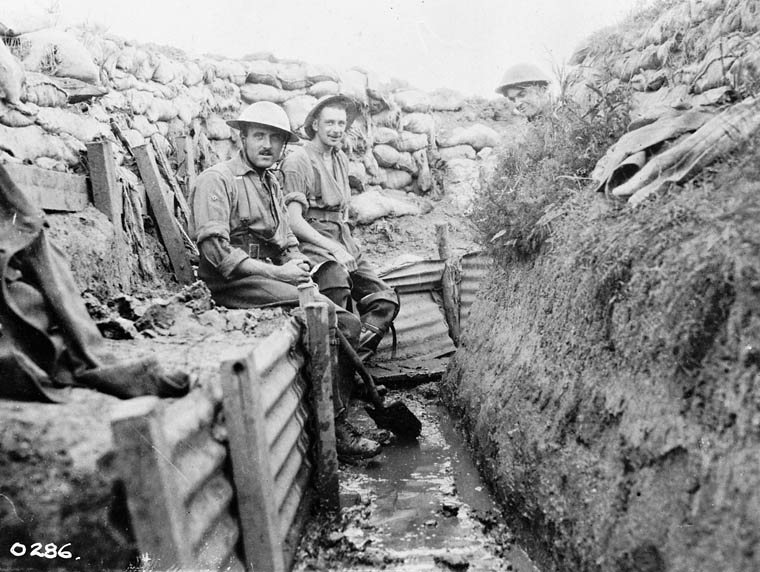 A few months, ago, we asked for your favorite words and terms borrowed from the military. Reader Larry shared this Telegraph article with us, which offers up some revealing tidbits about phrases conjured up during the Great War:

Among the list of everyday terms found to have originated or spread from the conflict are cushy, snapshot, bloke, wash out, conk out, blind spot, binge drink and pushing up daisies.

A snapshot was a hastily aimed rifle shot. Lousy actually meant “infested with lice.” (Think about that when you want to quit your lousy job. You’re not an exterminator, are you?) Crummy follows the same pattern, only with crumbs instead of parasites. Binge and cushy reflect the crashing together of cultures in the trenches. Binge was a term apparently restricted to Lancashire, but spread quickly among troops. Cushy comes from khush (the Hindi word for pleasure) and originated with Indian soldiers serving with Britain.

My favorite revelation is the euphemism gone west for dying in battle. In the U.S.A., we talk of a situation going south when everything goes wrong. I don’t know why south is our compass heading for failure, except that south is “down” on a borealocentric map. It could also relate to being sold down the river, which for a slave in the American South meant a harsher life. The river they spoke of was the Mississippi, and downriver was due south.

Going south is a synonym for going pear shaped, which is the preferred term across the pond. Indeed, the Royal Air Force gets the credit for the term, but no one quite knows why. The two best explanations we’ve heard are: pear shaped refers to women, which are bad news; pear shaped refers to a poorly executed aerial loop – not round, not elliptical, but flat at the bottom. I think I’ll take the latter, as I don’t know many women who fancy themselves as troublesome or shaped like a Bartlett.

Sticking with the theme of bad things happening, Anne, our stalwart reader and teacher from North Carolina, added to the conversation thusly:

To “buy the farm,” meaning to die (which then becomes go out of business, cease to function, etc.) was a WWI term. A lot of young rural soldiers joined the army, each planning to use his pay to marry his sweetheart after the war and buy a little farm somewhere. The phrase became a cliché when one or more of them died, and their comrades mourned that perhaps he had bought the farm now (perhaps in heaven?).

As with much slang, dispute exists on the origins of buy the farm. World Wide Words cites Anne’s etymology as one of the more plausible sources. Snopes points out that to buy as a euphemism for dying dates back even further. Hence, to buy the farm means to lay claim to a piece of land – i.e., your grave.

References:
“The trench talk that is now entrenched in the English language,” The Telegraph
“Sold down the river,” Grammarphobia
“Go pear-shaped,” Not One-Off Britishisms
Fraser’s Phrases: “It’s All Gone Pear-Shaped,“ BBC America
To buy the farm,” World Wide Words
“Buy the Farm,” Snopes.com