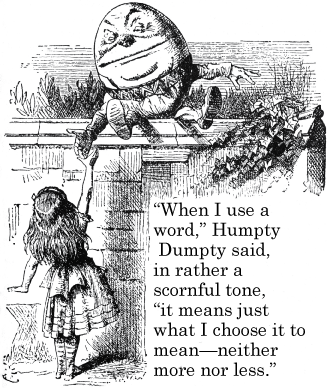 You see it’s like a portmanteau—there are two meanings packed up into one word.
— Through the Looking Glass, Lewis Carroll

English is the world’s language, and it’s easy to see why. Maybe it’s British colonialism or American exceptionalism, but the way I see it, English is supreme because it’s so accommodating.** We have no Academy Anglaise shutting down innovation and forbidding loanwords. As a result, English is alive and vibrant, but it also festers with unorthodox orthography (courtesy of these foreign loanwords) and bad ideas gone horribly wrong. Among these “ideas” are portmanteau words. Such creations are especially rife in the world of marketing, because creativity is our job, I guess. For example, we’ve given birth to infomercial and infotainment, to which Lex has added irritainment (his own personal handiwork). Likewise, we have advertorial (I’ve written many of these), which is an advertisement masquerading as a feature article. Imagine my surprise to encounter badvertising —bad advertising. I think. Users of the word can’t quite agree what it means. If you’re going to encourage the free market, you’ll have to put up with periodic chaos:

Smarketing — but shouldn’t all marketing be smart marketing?

Threepeat — is still a repeat, thank you.

Permalancer — a permanent freelancer is still a freelancer. (By the way, a created word that doesn’t attempt to be a pun is a neolexic portmanteau.)

Decruiting — because we enjoyed rightsizing so much.

Cremains — cremated remains are also called “ashes,” a word that doesn’t invoke the callousness and fallen stomach this word does. Matt from Virginia (a journalist, not an undertaker), offered this word and comments, “It strikes me as one of those jargon terms that ought to remain in the shop and not be used with clients, and yet it is.”

Any formation with man (mansplain, mancriminate, manspreading) — we’ve covered the idiocy of murse, meggings, and mandals. I concede the man words have an edge of misandry which makes them both telling and funny.

Any formation with mom — Stephanie also-from-Virginia writes: “Last night I heard one that made me cringe. Momager. It was in reference to Kris Jenner, which I think made it even more painful.” Agreed. More positive is momtrepreneur, but again, it’s redundant. Isn’t entrepreneur sufficient?

Sometimes, though, the coal vein produces diamonds. Three we like:

Procrasturbation — suggested by Erik in California. Since this is a family-friendly site, I’m going to assume it involves putting off productive work by navel-gazing.

Portmanteau — Lewis Carroll created the lexical meaning, but he didn’t create the word. It already existed in English to describe a suitcase for clothing, made by combining the French porter (to carry) and manteau (cloak) — in other words, portmanteau is itself a portmanteau. Now that’s meta. Cue Xzibit!

*Because I used the word, here is a turducken.

**English is by no means the king of compound words. That distinction likely goes to German (and also Dutch), which has no beef about stringing together endless trains of words to create new ones. For example: Rindfleischetikettierungsueberwachungsaufgabenuebertragungsgesetz — literally “bovine-flesh-labeling-over-watching-on-give-over-carrying-out-law” — describes a “law delegating beef label monitoring.”