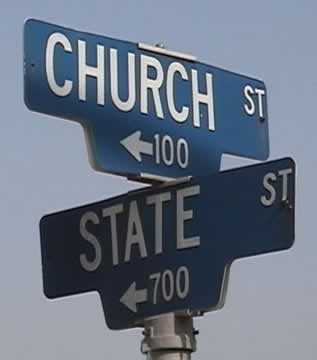 Companies can be agnostic, and Ben Zimmer has penned a recent article on how economies are secular. No, economists did not borrow the term from the Church or Voltaire. As Zimmer writes:

In economics, “secular” is not opposed to “spiritual” or “sacred,” as it is in theological circles. Rather, it describes trends that are not cyclical but persist indefinitely.

Zimmer goes on to explain that secular derives from the Latin saeculum, a word denoting the outside span of a human life, roughly 100 years. To the Romans, secular events did not occur often, and marked the passing of generations. To Christians, saeculum signified things temporal — as opposed to God, who represents aeternum. (Note Paul’s description of the time between Christ’s Resurrection and Second Coming as “this present evil age” — praesenti saeculo nequam.)

In other words, secular derived two definitions from the same root meaning. Eventually, the Christian church began to use secular to describe activities outside church life, which remained the dominant definition for centuries. In the 1800s, scientists (including the dismal sort), began using secular for lengthy trends  — for example, secular stagnation.

Zimmer’s article led me to ask Lexiciders for other words that sport dual meanings derived from the same root. Debbie G. suggested gross, a versatile word meaning “disgusting,” “unrefined”, “calculated before taxes or costs”, and “twelve dozen”, among others. They all originate from the Latin grossus (“large”), a meaning that lives on in gross anatomy and gross motor skills. David M. proffered current, from Latin currere (“run”), which gives us a flow of water or electrons (noun) and also that which is newest or most contemporary, such as current events (adjective). David also notes that the same Latin word gives us currency, which clues us in to how quickly money (and economies) can change.

And that brings us full circle back to secular stagnation, which complains economies sometimes don’t change quickly enough. You can’t please everyone. FORMICATION: a tactile hallucination involving the belief that something is crawling on the body or under the skin.

This word was just too good not to share!